Melting Pot is an AHRC-funded archaeological research project, which will explore the connections between food and identity in Viking-Age England. We will use cutting-edge bioarchaeological and materials-science techniques to undertake the first systematic and interdisciplinary study of the role of food and cooking in forging social relationships in Viking-Age Britain.

Though often seen in purely nutritional terms, when we think about it, the central role of food in identity-making is obvious: think about the English Sunday Roast, the Soul Food of the Southern USA, or the ways in which Chinese and Indian food have been re-imagined and incorporated into western cuisine.

The same must have been true prior to colonialism and empire; in a cosmopolitan world like Viking-Age England - in which long-distance travel appears to have been relatively commonplace - we must expect the production and transformation of local or regional cuisines to have been socially and culturally loaded. This period has frequently been explored in terms of identity, and is often refeered to as a 'melting pot'. These studies have tended to focus on objects, buildings, language,and landscape, but rarely food. This is where our project comes in.

We want to understand not just what people ate, but how they at it, as well as how they prepared and cooked it,the methods the equipment involved. Pottery is thus central to our aims. Is it possible to associate particular types of vessel with particular foods? Or wth particular ways of transporting, storing, cooking, or eating food?

We also want to understand how cooking and food culture varied across time and space, and whether social and economic phenomona like migration, urbanisation and commercial expansion had an impact. Were the cuisines consumed in the cosmopolitan entrepôts of York and Ribe significantly different to those experienced in contemporary rural sites and smaller, less wel-connected towns?

How much are the traditional maps of Viking-Age England visible in food culture? Did people living in the Danelaw settlement of northern and eastern England cook and eat differently to those in the Saxon South? How did both compare to the 'homelands' of southern Scandinavia?

How are we going to do this?

We will analyse the ways in which pottery was used. Wear patterns can tell us about how much pots were handled, tipped, rotated, moved around, or stirred. Charring patterns tell us about how they sat in, or hung over, the hearth. Chemical abrasion of internal surfaces can point to fermentation, which gives us a clue as to contents. We can then sample and analyse the contents of carbonised food crusts: deposits that built up when pots were left to boil over. This will tell us what plant and starches were cooked in the vessel, while analysis of fats and other residues absorbed into the fabric of the pot can point to various meats,fishes, dairy products, alcohols, and sealants (e.g beeswax).

By systamtically applying all of these techniques to a large quantity of pottery from well-dated sites across England, we will look for patterning in the use of pottery, and in the ways people worked with food.

Having done this, we will compare the results of analyses of different types of pottery ('wares') and diferent types of vessel (cooking pots, dishes, bowls, and so on). This will tell us if particular forms of vessel were being used selectively in order to store, transport, process, present, or consume particular foodstuffs.

Then we will consider intra-site variation, through controlled comparison between sherds from multiple contexts separated in time and space. This will tell us the degree to which culinary practice was subject to change and innovation at any given site.

Then we will compare the results of analyses on ceramics from different types of site. This will tell us if the cuisines consumed in cosmopolitan entrepôts like York were significantly different to those experienced in contemporary rural and less well-connected sites.

Finally, wewill compare the results of analyses on ceramics from sites in the Danelaw, southern England and southern Scandinavia. This will tell us whether distinctive cuisines can be identified in politically disparate areas

So, do keep following and see how we get on! Our progress will be published via open access journal articles, conference presentations, and museum display materials, as well as on this website, our Twitter feed (@foodAD1000), and through public and special events. 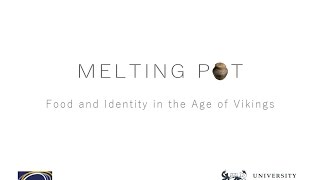